LC-MS-MS Analysis of Emerging Contaminants ( EDCs, PPCPs and PFCs) and Nanomaterials in the Environment 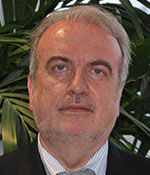 Most of the short course topics should be of interest to analytical chemists involved in method development, laboratory personnel, scientists, and governmental and industry regulators. The course is of interest for newcomers that want to learn more on the possibilities of LC-tandem MS and LC- high resolution MS (orbitrap) in the environmental field.

In this course you will learn about the various Liquid chromatography- tandem mass spectrometric (LC-MS-MS) methods used for the determination of endocrine disrupting compounds (EDCs) ,pharmaceuticals and personal care products (PPCPs), perfluorinated compounds (PFCs) and carbon-based nanomaterials in environmental samples. Among the EDCs new brominated flame retardants and steroid sex hormones. More than 70 Pharmaceuticals are included in this short course such as antibiotics, ß-blockers, anti-inflammatory drugs, lipid regulators, cyutostaics ,psychiatric drugs and illicit drugs. Personal Care Products compounds like benzotriazoles, benzothiazoles benzophenones, cinnamates and camphors as well as Perfluorinated compounds (PFCs) such as perfluoro- alkylcarboxylic acids, sulfonates and sulfonamides are listed too. Fullerenes were selected as target nanomaterials.In total analytical methods for an average of 200 emnerging chemicals will be presented. LC-MS-MS has gained in popularity, due to the sensitivity, ruggedness and ease of use given by API interfaces, such as electrospray (ESI) and atmospheric pressure chemical ionization (APCI),atmospheric pressure photoinization interface (APPI) respectively combined with a new generation of MS equipment (QqQ, linear on-trap Q TRAP and time of flight Q TOF and Orbitrap Velos and Q Exactive). LC-MS-MS have become often routine methods for the 200 Emerging chemicals listed in this short course. The latest developments on the use and comparison of hybrid instruments like LC-Q-TOF-MS , Q-Orbitrap-Exactive and Q Trap LC-tandem MS for multi-residue analysis of pharmaceuticals, illicit drugs, perfluorinated compounds and fullerenes will also be reported.